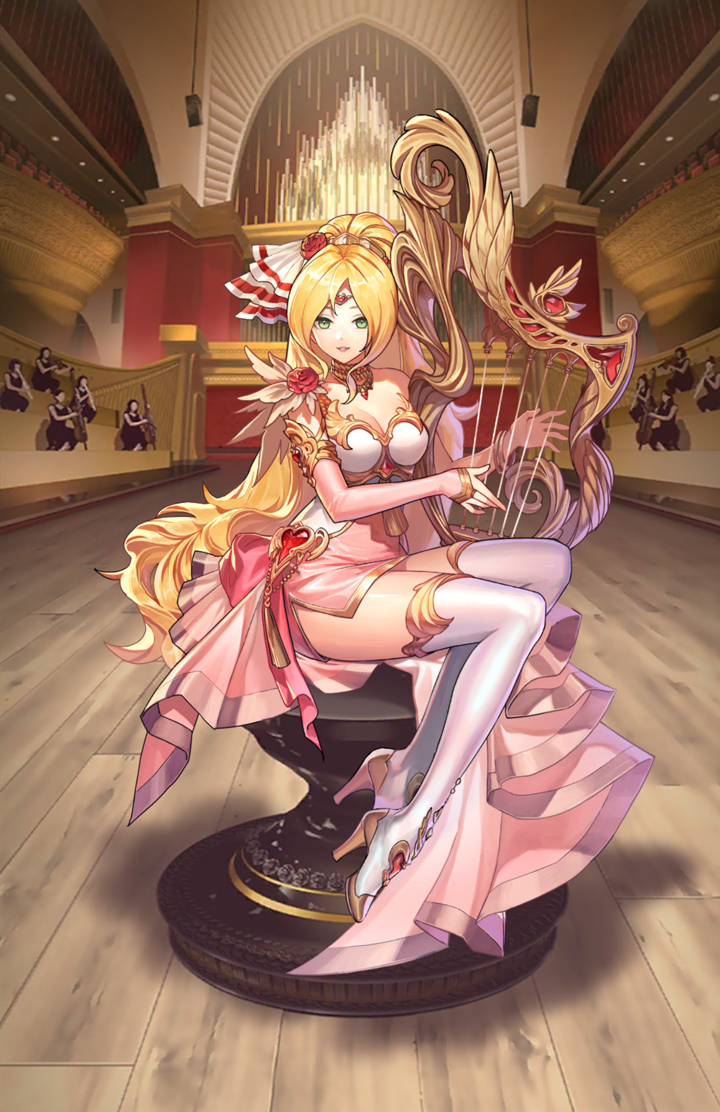 Eleanor is one of the supreme heavenly deities who used to supervise the world.

She's the goddess of wealth and prosperity. Eleanor is fated to earn money even if she stays idle. Her fate allowed her to become a root-like figure in Heaven's financial matters, but it also caused Heaven's finance to be irreparably damaged the moment Eleanor left Heaven after the World Tree lost its power. Heaven still hasn't overcome this recession, and Angie the angel, who happened to be appointed as the Secretary of the Heaven Treasury, is hard at work to pay off Heaven's debt. But Eleanor herself is not aware and unwilling to aid in Heaven's financial matters.

She's also the goddess of art with refined tastes. Eleanor enjoys epic poetry, classical music and is also a skilled harp player. Melodies from her harp are told to soothe the hearts of warriors. The only issue is that warriors who hear her music become too drunk on her melodies and lower their guards too much. Her favorite events are concerts where she's the main performer. She doesn't consider an event unless the stage design, lights, and outfits of every performer are top quality.

Eleanor is an indecisive loafer who wants to just spend her money lounging around and not deal with any important matters. Eleanor does not or want to think deeply about any serious issues. She can just ignore them. Thanks to this, she easily obeys and adjusts to any environment. According to her, change requires difficult work with a low chance of success, and most of all irritating. It's told that Eleanor did have hopes and dreams about leading the world in a better direction as a supreme goddess from Heaven and worked towards her goals. But, repeated failures made her give up slowly as time progressed. Now, Eleanor only focuses on matters that don't require focus or any work and runs away from important matters or problems in disgust.